April 07, 2009"Being able to predict earthquakes is the Holy Grail of seismology," Caltech seismologist Egill Hauksson said. "The more we try, the less progress we seem to make.
a scientist little known in earthquake circles made a bold prediction of a destructive earthquake in the Abruzzo region of central Italy based on spikes in radon gas. Giampaolo Giuliani went so far as to tell the mayor of a town there that it would strike within the next 24 hours.
His deadline passed and for days, nothing happened.
Then, early Monday, a magnitude-6.3 earthquake struck near the town of L'Aquila, sparking a controversy around the world about whether Giuliani truly predicted the temblor or whether it was a fluke of timing.
Mar 18, 2010 a group of physicists, led by physics Nobel laureate Georges Charpak, has developed a new detector that could measure one of the more testable earthquake precursors – the suggestion that radon gas is released from fault zones prior to earth slipping.
elevated concentrations of radon gas in soil or groundwater could be the sign of an imminent earthquake. It is believed that the radon is released from cavities and cracks as the Earth's crust is strained prior to the sudden slip of an earthquake. In order to test this hypothesis, however, researchers would need to deploy several hundred detector devices along a fault zone.
Charpak's alternative detector is based on established technology already in action in extreme conditions at laboratories such as CERN. It consists of a wire-type counter, which is the concept for which Charpak won his Nobel prize in 1992. In these devices, particles such as radon enter a gas-filled container and ionize some of the gas particles. The resulting ions and electrons are accelerated by a potential on the wire, causing a cascade of ionization that results in a current in the wire.

One key feature of this new detector design is that it works with ambient air, thus avoiding the need to keep refilling the detector's ionization chamber with a particular gas. It also has a high efficiency, which was achieved by including multiple wires in the ionization chamber. In laboratory tests, the researchers report a radon count of 140 Bq.m–3 over one minute, which is comparable to that offered by commercial devices. The tests also show that the device still functions in 70% humidity,

it has been known for a while that radon levels in the atmosphere can correspond to tectonic activity. Direct measurements of radon levels have shown large fluctuations immediately preceding earthquakes. What this paper presents is the idea that instead of a direct measurement of radon levels, remotely sense temperature and humidity measurements can be used as a proxy for the same phenomena. When Radon in the air decays, it ionizes other nearby molecules or atoms. These newly formed ions are then hydrated by atmospheric water, with the result that air humidity drops. The latent heat of evaporation is released from the water during the phase transformation, which results in a temperature increase. So, big pulses of Radon into the atmosphere, as are associated with tectonic activity and seem to occur leading up to earthquakes, results in an initial decrease in humidity and increase in temperature. The radon flux reaches a maximum and starts to decrease just prior to the "seismic shock", during which time there is a corresponding rise in humidity and drop in temperature.

Posted by suniti at 5:20 AM No comments:

Ever thought of chocolate graphene

Members of Girl Scouts of the United States of America Troop 25080 came to Rice's Smalley Institute for Nanoscale Science and Technology to see  how graphene -- a single-atom-thick sheet of the same material in pencil lead -- can be made from just about any carbon source, including food, insects and waste.
The cookie gambit started on a dare when chemist Tour mentioned at a meeting that his lab had produced graphene from table sugar.
"I said we could grow it from any carbon source -- for example, a Girl Scout cookie, because Girl Scout Cookies were being served at the time," Tour recalled. "So one of the people in the room said, 'Yes, please do it. ... Let's see that happen.'"
. Rice graduate students Gedeng Ruan, lead author of the paper, and Zhengzong Sun calculated that at the then-commercial rate for pristine graphene -- $250 for a two-inch square -- a box of traditional Girl Scout shortbread cookies could turn a $15 billion profit.
"That's a lot of cash!" said an amazed Sydney Shanahan, a member of the troop.
A sheet of graphene made from one box of shortbread cookies would cover nearly three football fields, Sun said.
The experiment was a whimsical way to make a serious point: that graphene -- touted as a miracle material for its toughness and conductivity since its discovery by Nobel Prize-winning scientists Andre Geim and Konstantin Novoselov in 2004 -- can be drawn from many sources.
To demonstrate, the researchers subsequently tested a range of materials, as reported in the new paper, including chocolate, grass, polystyrene plastic, insects (a cockroach leg) and even dog feces (compliments of lab manager Dustin James' miniature dachshund, Sid Vicious).
The process:  the researchers were able to make high-quality graphene via carbon deposition on copper foil. In this process, the graphene forms on the opposite side of the foil as solid carbon sources decompose; the other residues are left on the original side. Typically, this happens in about 15 minutes in a furnace flowing with argon and hydrogen gas and turned up to 1,050 degrees Celsius.
Tour expects the cost of graphene to drop quickly as commercial interests develop methods to manufacture it in bulk.
Posted by suniti at 2:17 AM No comments:

Even the DNA is quantum friendly !!

DNA can discern between two quantum states, research shows
Posted by suniti at 12:53 AM No comments:

He designed the neutron bomb using pencil, paper and a slide rule given to him by his father for his 15th birthday.
And then went on to feel:
"It's the most sane and moral weapon ever devised
It's the only nuclear weapon in history that makes sense in waging war. When the war is over, the world is still intact."
A jew by birth with the inherited ingenious brains. Imagine neutron radiations and the nuclear fusion chain reactions being perceived as peaceful just because they cause less visible destruction to the surroundings and the soldiers deserve to pay a price for what they chose or rather are sent for!!
Thankfully the "cold war" was actually without any action that we could not see the weapon`s repurcussions.
Then perhaps Einstein missed the peace Nobel Prize by a few years, considering his origins/stature and his pioneering  Theory of Relativity.Or that the Photoelectric effect won the race...

The call of the Himalayas 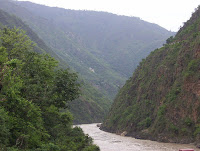 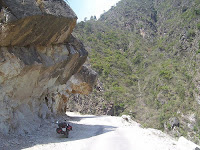 Once you've lived with the mountains You will return You will come back To touch the trees and the GRASS And climb once more the wind swept Mountains and Valleys
Posted by suniti at 2:10 AM 1 comment:

From the world`s economic stage to the sporting arena; India is becoming a force to reckon with.
Indian athletes stand  upto the might of the chinese armada.These sparks are just a chink of the fireworks that will follow in future.
We have come a long way from Milkha Singh`s jubiliant performance 60 yrs ago.With the best gold haul ever; these girls make it look so simple 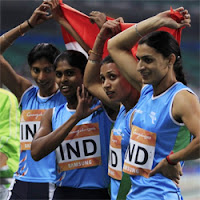 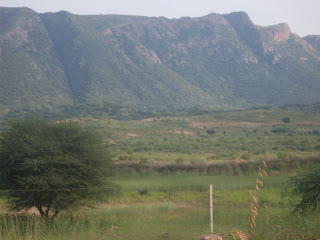 Mount St. Helens is most famous for being Napolean`s last exile and where the die hard spirit breathed his last and then for its catastrophic eruption on May 18, 1980, at 8:32 am PDT which was the deadliest and most economically destructive volcanic event in the history of the United States. Fifty-seven people were killed; 250 homes, 47 bridges, 15 miles (24 km) of railways, and 185 miles (298 km) of highway were destroyed. A massive debris avalanche triggered by a earthquake measuring 5.0 on the Richter scale, caused an eruption, reducing the elevation of the mountain's summit from 9,677 ft (2,950 m) to 8,365 ft (2,550 m) and replacing it with a 1 mile (1.6 km) wide horseshoe-shaped crater.The earthquake was caused by a sudden surge of magma from the Earth's mantle. [3] The debris avalanche was up to 0.7 cubic miles (2.9 km3) in volume. The Mount St. Helens National Volcanic Monument was created to preserve the volcano and allow for its aftermath to be scientifically studied.

As with most other volcanoes in the Cascade Range, Mount St. Helens is a large eruptive cone consisting of lava rock interlayered with ash, pumice, and other deposits. The mountain includes layers of basalt and andesite through which several domes of dacite lava have erupted. The largest of the dacite domes formed the previous summit, and off its northern flank sat the smaller Goat Rocks dome. Both were destroyed in the 1980 eruption.
When Mount St. Helens blew its top in 1980, it wasn't a surprise that it happened, but even today the extent of the damage is hard to fathom. The eruption knocked down 100-foot trees like matchsticks and killed just about everything in its path. There have been several smaller eruptions since then, but nothing like what happened in 1980.

Today, dead tree trunks still litter the landscape. But, if you take a closer look, you'll see another kind of eruption; an eruption of life on the mountainside. For Bishop, it's a blessing. "It's a rare opportunity for scientists to get to study a devastated area and how it comes back from scratch in such detail," he says.


With help from the National Science Foundation (NSF), Bishop is documenting the return of living things to the once lifeless mountain. "Up until the last 10 years, the landscape has been completely dominated by lupins," says Bishop. He says these flowering lupin plants are able to create new soil from volcanic ash. That new soil has created a habitat for the Sitka willow. But, Bishop says there is a problem. "One of the things we've realized about these willows is that they're not getting big. And that's important because they create habitat for birds and mammals."


The culprits are small invasive weevils that are on the attack. They've taken up residence inside the willows' stems, stunting the plants' growth or killing them. Bishop says there is a lesson in all of this. "Seemingly insignificant organisms, like insects that consume plants, play an extraordinarily important role in the sorting out process of deciding, essentially, which plants are going to stay in the landscape and which ones are going to disappear."
Bishop points out that the imbalance between plants and insects on Mount St. Helens should be expected in rudimentary systems and will cause instability until a more complex community of plant and animal species is sustainable, or until the day Mount St. Helens itself changes the equation once again ,like its famous resident Napolean ,who never gave up

Posted by suniti at 1:02 AM No comments:

suniti
Life in all its hues arouses me; interested in everything- colors, music, books and science. My passion lies in chemistry.And then always seeking its link to our world around. My itch to share my beliefs brings me here